Lamont Heartfelt Vanity is one of the two main protagonist characters that appears in the series Solecism. He is the little brother of Christopher Sincere Pride, and he is a paradox of the highest order. To see his true existence, go here. To see the principle behind the reality of the former, go here.

Glory of the Defeated[]

Graszton Unturnableblade makes his appearance within Meio Hadesu, seeking to find The Bishop, as a means to remove him from his position. However, he is under stress after realizing that he'd be up against an Omnipotent Being. Soon, he confronted the Bishop, engaging in a very philosophical conversation. The Bishop observed the existence of Graszton Unturnableblade, ultimately realizing that he was a being that had stepped beyond the union of Nothing and All Possibility. Graszton understood that The Bishop's wave-function was literally everywhere. There was nothing that The Bishop's aura and phenomena did not permeate. The two soon engaged in combat after realizing their goals were distant. The match eventually forced Lamont to reveal The Black Monarch, but ultimately, to no success.

In the year 9412 A.A. (After Advent), Lamont and his brother Sincere were known for venturing across the world, waking up those who have fallen asleep. Lamont and Sincere found themselves walking through a desert, looking for a nearby town. Apparently, they had been out of work for a while, and they had been without food for days. They eventually come across a city; only to find out that there was someone who had fallen asleep within the city. They see this as a way to get some money and some food; maybe even a place to rest. However, a group known as Blue Rose had appeared to fix the paradox, which they could not allow.

After the hellacious war with Blue Rose, Lamont and Sincere found themselves within New Earth City. They are still without memories. However, along with trying to find someone who has fallen asleep, the two brothers are also trying to find a place to sleep and eat at this point. Little did they know; the world of Science versus Religion was leering behind their shadows…

A little after, Lamont had gone to stay with his wife, while Sincere had gone out looking for a place to sleep.

After being caught within the war of Period and the Emerald Knights, Lamont and Sincere find themselves within New Mars City. They are now looking for the Xenogems for these gems just may be the answer to what they seek.

After finding a Xenogem, Lamont and Sincere found themselves within Lost Jupiter City, but there were still three more left to find. Their only clue is that these three gems are located at the End of Time. Somewhere outside of the physical realm, the Songstress of Time has found herself trapped within the Heart of the Aria Lostscape. Although time does not exist within this realm, she is quickly disappearing. Should she cease to exist, then the Macro Cosmos will collapse. The sands of time are running out, and someway Lamont and Sincere must find a way to save her...

Eventually, Lamont and Sincere finally gain a break from fighting, and have decided to pick up where they left off; waking up those who have fallen asleep. They once again have no clues to finding what they seek, or even where to start looking…

2 years pass by since their intervention with Rose-colored World, and the two brothers still have not found what they are searching for... However, recently, increasingly large amounts of people have been falling asleep. The numbers are spreading into the centillions relatively fast. Sincere and Lamont know that they cannot possibly wake up everyone, but the number has upset the Macro Cosmos. If they do not find out the cause to this, their timeline will fold upon itself, just like the other infinite adjacent ones so far. The Macro Cosmos, or rather one of the Epitaphs plans to reset all structures of reality in order to correct the unstable balance. Lamont and Sincere have taken matters into their own hands by asking the Epitaph for some time. The Epitaph gives them 7 days; not a quantum second more or less. If they fail, all is lost.

Sincere and Lamont ends up travelling back to the year of when everything changed for them. It is the last period of time that they can remember. Not too long after reaching this year, they witness the storm that brought upon The End. They believe that the clue to what they are looking for will be within this timeline, but they have to find a way to stop the impending end in order to find what they seek.

One of the members of God's Vision has set the stage in motion, collapsing the former collection of infinities in order to create a stable world of pure ruin. However, with the creation of this new world and the existence of two paradoxes that supersedes all contradictions, the seals on the Deus ex Machinas have be1en released. God's Vision has also stolen the Songstress of Time, forcing the hand of existence. Now, all modes of existence are subtracting, multiplying, and dividing themselves by 0. God's Vision has a masterful plan in play, but something has materialized that has changed all plans. Sincere has become a victim, falling asleep.... Lamont becomes determined to end this war and save his brother before he disappears, along with their memories.

Pharos of the End[]

Lamont returns in the chapter "Enter the Storm III" in the 3rd volume of Pharos of the End II. He reunites with his brother, as the two discuss what they've been up to. The two shared a large laugh as they had fully tricked every cosmic ensemble that they had ventured through till this point. The brothers reveal that a large majority of their story had been staged on a critical level in order to reach The Art Gallery in order to gain The Black Universe. As the substitute of creator of Heir to the Stars, Lamont demonstrated that he possessed power over all over stories written till that point. Unfortunately, their victory was short experienced as Xeranthemum made an actual appearance before two brothers, fully removing them from ever being...

The Black Monarch, alongside The Silver Devil and The Hall of Seven Echoes appeared to challenge ♠The Ace of Spades♠. The Black Monarch slayed the former creator Suggsverse, not even attempting to reach the concept of effort.

Later, The Black Monarch reached a new zenith of himself, reaching The Lion's Den. It is here, he is confronted by Ultimania vé Shion - LCS 2.

(Substitute) ♠The Ace of Spades♠[]

The Black Monarch was chosen by ♠The Ace of Spades♠ to be the Supreme Creator of the Heir to the Stars Cosmology for a period. However, we only really saw his reach extend in the 1st and 2nd Floors. However, his authority was undeniable at this point. 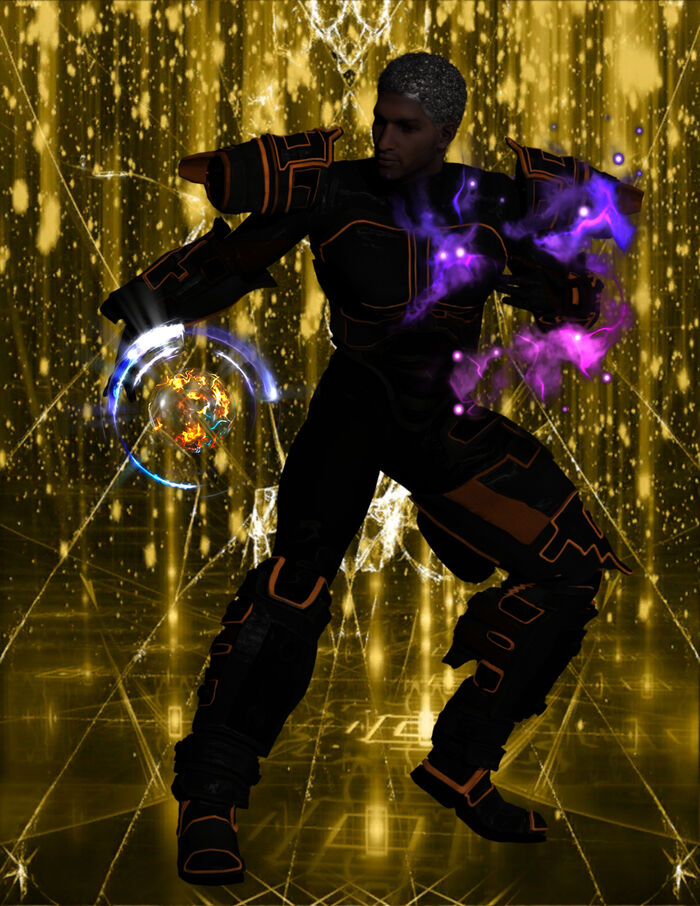 *This is Graszton through the Glory of the Defeated books

Reality Warping Immunity: He was shown to be completely immune to the reality warping of The Bishop, whom had just completely warped the fabrics of reality, rearranging the infinite Omniversal structure and its complete infinite levels and infinite subsets and supersets of infinity. Matter, mass, energy, time, space, constants and laws were all rearranged to his will without any effort at all. Graszton was completely unaffected.

Meta Durability: Graszton was completely unaffected by pure destruction of Creation. The Bishop mentally condensed all Omniversal possibilities into a single occurrence, causing a violent burst of energy surpassing the Absolute Infinite, completely breaking down the actuality of Graszton Unturnableblade. However, he remained completely unaffected, literally shrugging off the attack.

*This is Lamont through the Solecism books

Lamont Heartfelt Vanity is an observer anomaly who can wield power from the higher dimension, above The All.

Inverted World: Lamont Heartfelt Vanity has an ultimate defense known as Inverted World (or Spiritual Interference / Quantum Entanglement). Through this defense; up and down, left and right as well as forward and backward are opposite. It is not just the sense of direction that is changed; all senses and vectors are also inverted. The effects of a target that targets him on a physical, mental and spiritual level are also inverted. It's similar to that of a mirror. His ability involves quantum entanglement, which is a form of quantum superposition. However, he carries a dual existence that manipulates the inverted world automatically onto him. Through his ability, he is virtually untouchable.

Enhanced Resistance: When the strings of reality tried to unweave Lamont, reality itself proved to be ineffective against him.

Quantum Jumping: Lamont has shown the ability to quantum jump across a centillion amount of universes in a quantum frame of time.

*This is Lamont during Pharos of the End.

The Black Monarch was hailed as ♠The Ace of Spades♠ at this point, solely governing over The Art Gallery, and fully encompassing over The Mainfold.

*This is Lamont through the Continued Story arc. By the end of this arc, Lamont's power had jumped to the zenith of Heir to the Stars.

Beyond the Identity: When the Possibility, Totality, and Nothingness of The Black Monarch was cut down; completely sliced in actuality and potentiality of that which is forever the largest article conceptualized and imagined by any mind, and going even deeper, transcending and slashing down that which cannot even be imagined and conceptualized by any mind – the very essence of The Black Monarch, he was able to maintain his "Self".

Beyond Deus ex Machina: When the origin of all definitions where absolutely anything is possible was cut down, turning The Black Monarch into a simple impossibility within and outside of the Context and Paratext of the Story / Plot / Verse, The Black Monarch caught the effect.

Lamont Heartfelt Vanity exists as an Inverted World (or Spiritual Interference / Quantum Entanglement). Because of the fact that the effects of a target that targets him on a physical, mental and spiritual level are inverted, he is similar to that of a reflection principle. He exists as a reflection principle encoded with quantum entanglement, which is a form of quantum superposition.